Marc Schmidt in pre-grid at Mettet

Marc-Reiner Schmidt, a.k.a. PowerSlider, is one of the most successful supermoto riders these recent years. Born in 1995, he piled up championship titles in Switzerland and Germany between 2002 and 2009, in categories from 50cc to 250cc. Since 2010, he’s been riding with the big boys in 450cc, and won two titles in Switzerland (2012 and 2014), and the European title in 2015. In 2016, he finished  second in the Supermoto World Championship behind 5-time world champion Thomas Chareyre.

In 2015, Marc Schmidt also won the Superbiker in Mettet, the biggest worldwide event in Supermoto, beating Romain Febvre and Thomas Chareyre! This is where this shot was taken. It was one of my first encounters with him. He was clearly feeling confident and I liked how relaxed he looked about it. On the Saturday afternoon, riders were getting ready in pregrid, and I was getting ready to shoot the session with a nice, late-afternoon Belgian sunlight.

As I was taking pictures of riders getting from the pre-grid onto the track, Marc spontaneously took this pose, and it is one of my favorite shots of the weekend. At the time, we did not know of course that he would win the next day. Marc hiding part of his plate to make up a 1 plate took me by surprise, and I was so happy I had the correct settings to capture this in less than a second. Even more than a year later, I really find this picture very powerful.

You can find a gallery of this event by clicking here (text currently in French). 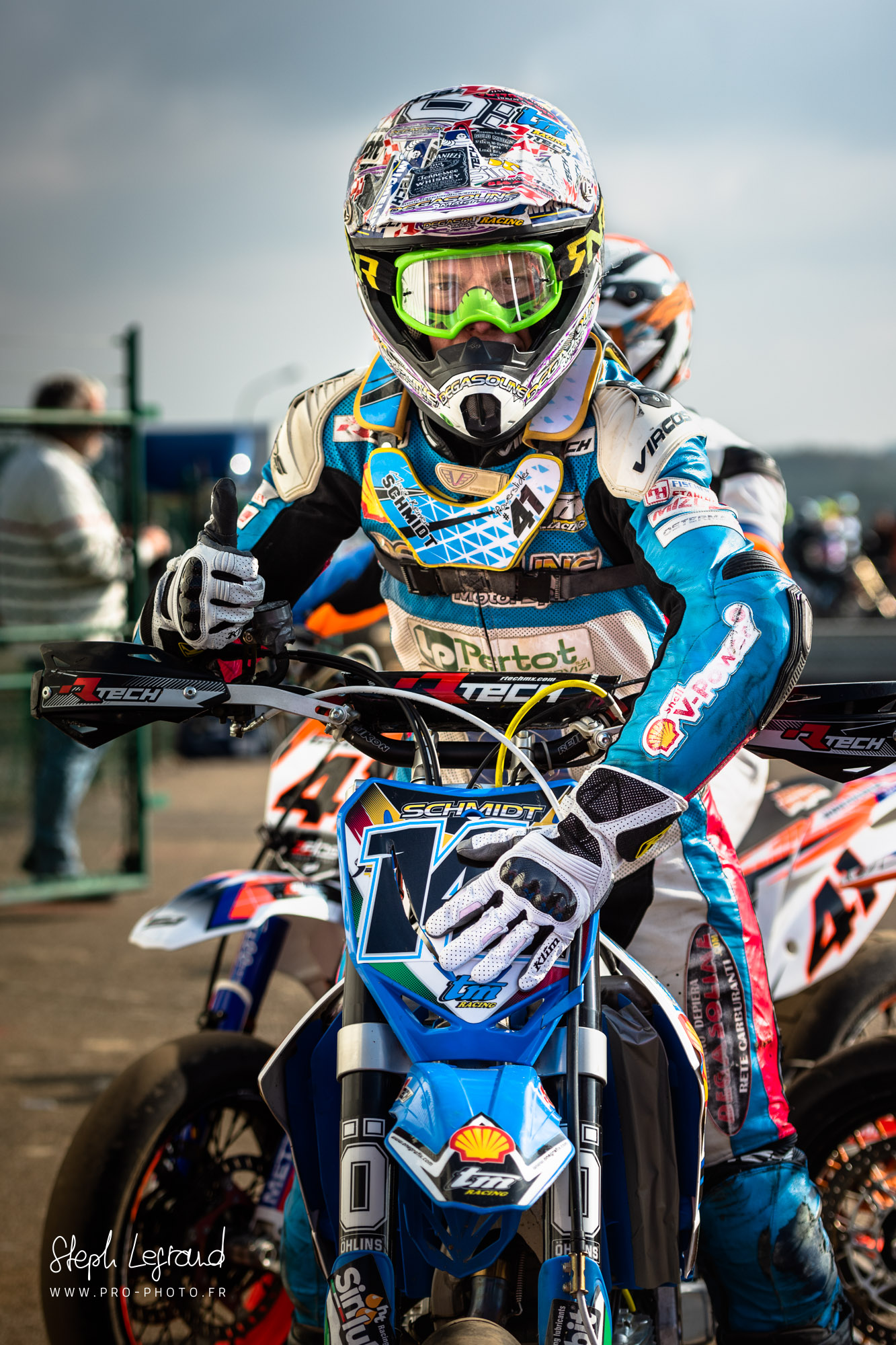 Based in Toulouse (France), Steph Legrand has specialized in supermoto photography since 2010. He offers photography and communication services to companies and individuals.

Do not hesitate to contact him for all your photo needs.

About the pictures on this page

Please note that each and every pro-photo.fr picture is protected by copyright laws and may not be used anywhere without specific authorization. This is true even if there is no signature on them, or even if you find them somewhere else on the Internet.

If you like them, and you would like to share them on your social networks or other media, feel free to request a price. Any unauthorized use will be prosecuted.

Passionate about supermoto for over 15 years, Julien is president of 100% Supermotard Club since 2015. Here is a small series in action and some portraits. Until last year, Julien was riding a TM [...]

“You wanna ride? Or you want an excuse?” Julien Lecreux, supermoto without compromise

A fine series of photos with Julien Lecreux, and a look back on his years in supermoto until this day. A tribute to all passionate amateur riders who make this discipline what it is.

pro-photo.fr celebrates 10 years of supermoto photography. On this occasion, this site is getting a makeover. And what better choice of photos to illustrate this anniversary? Let's take a break for a moment, take [...]

Receive our news by e-mail. Do not be scared, we hate spam too! (one message per month at the most)

For online orders, pro-photo.fr offers secure payment through Paypal and Stripe. You can pay for your order with all major debit or credit  cards.

Your information is encrypted and transmitted directly to our our payment processing suppliers. pro-photo.fr never has access to your credit card information.