In 2016, Belgian team NTD Racing was taking part in Mettet Superbiker, the biggest Supermoto event in the world, bringing together riders from all moto disciplines (road and off-road racing). Team NTD Racing had a good run in the 2016 French Supermoto Championship with three riders: Thomas Decaigny, younger brother Nicolas Decaigny, and Bruno Baulard. All three were riding Husqvarna bikes. On this picture, Thomas was gearing up for a Free Practice session in Mettet on the Friday, as I was taking a series of paddock shots for the team.

I had the opportunity to follow these three riders throughout most of the 2016 season on the French Championship. The “getting ready” phase is always one of my favorites in pictures: mechanical checks, concentration, gear checks… Each rider also has his habits, his rituals, his pace.

I really like to get to a point where, I hope, riders are less aware of —and less disturbed by— the camera. At that point, I am able to capture more spontaneous moments, more natural expressions. Here I was working with a fish-eye lens, this allows less conventional results. Then I chose a really dark treatment, it adds a fairly hard side to the picture, and it focuses on Thomas by eliminating a lot of unnecessary details. 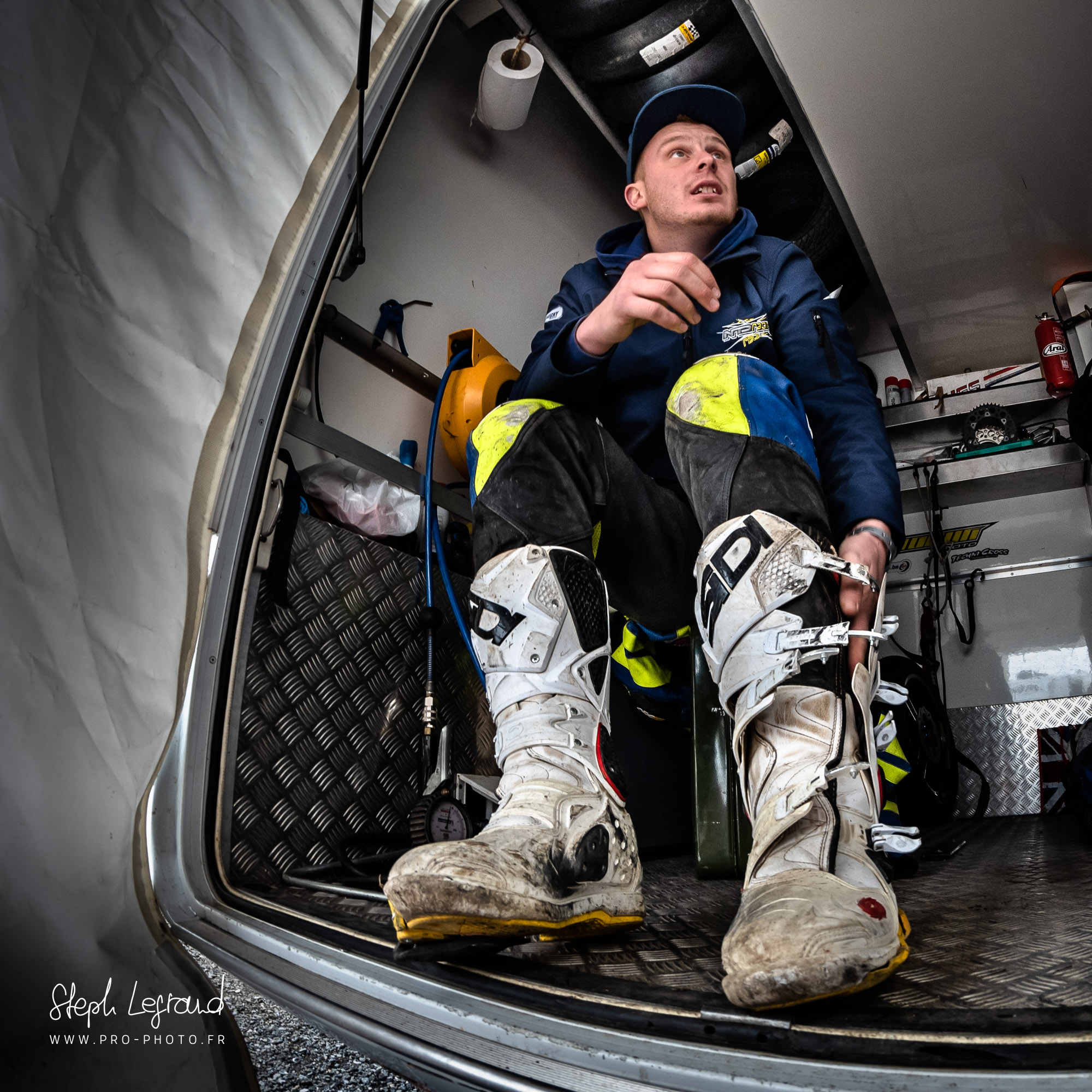 The One Shot Column

The One Shot column features a single picture in Supermoto, Motocross, or for a specific photo shoot. It is different to general galleries for an event. I take the opportunity to describe in more details something specific about the picture, or why it is more important to me. You can click on the picture to see a larger, better quality version. There are sharing buttons for your favorite social networks below, do not hesitate to share :) However, all my pictures are protected by copyright, so please do not republish them yourself (click here to check conditions).

Based in Toulouse (France), Steph Legrand has specialized in supermoto photography since 2010. He offers photography and communication services to companies and individuals.

Do not hesitate to contact him for all your photo needs.

About the pictures on this page

Please note that each and every pro-photo.fr picture is protected by copyright laws and may not be used anywhere without specific authorization. This is true even if there is no signature on them, or even if you find them somewhere else on the Internet.

If you like them, and you would like to share them on your social networks or other media, feel free to request a price. Any unauthorized use will be prosecuted.

Passionate about supermoto for over 15 years, Julien is president of 100% Supermotard Club since 2015. Here is a small series in action and some portraits. Until last year, Julien was riding a TM [...]

Photo shoot with Axel and Max

Here is a selection from a series I really like, taken during the track weekend in Carcassonne with 100% Supermotard Club in early August. A very red and contrasted series. The photos are framed [...]

As the 2021 edition of Mettet Superbiker is approaching, a little throwback to the 2016 edition with young Austrian rider Lukas Höllbacher. Five years ago, Lukas was already fighting at the highest level with [...]

Receive our news by e-mail. Do not be scared, we hate spam too! (one message per month at the most)

For online orders, pro-photo.fr offers secure payment through Paypal and Stripe. You can pay for your order with all major debit or credit  cards.

Your information is encrypted and transmitted directly to our our payment processing suppliers. pro-photo.fr never has access to your credit card information.